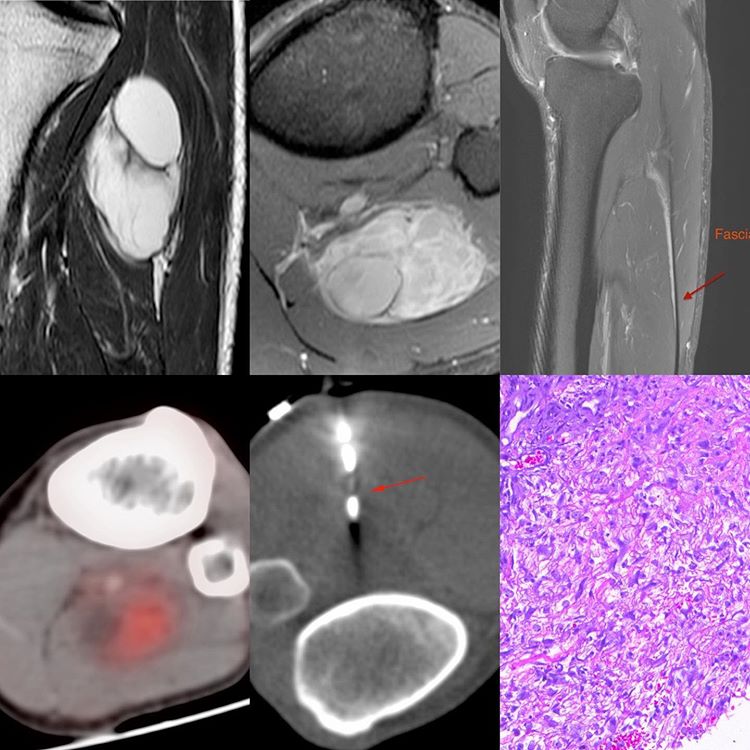 This is a 38-years old runner who felt a swelling in the popliteal fossa following a run. The assumption was he had injured a muscle or tendon and he came for an MRI.

The MRI shows a mixed cystic, solid tumor in the posterior compartment of the proximal leg (T2 sagittal, post contrast axial and sagittal) with a fascial tail that suggested a more aggressive sarcoma with a likely myxoid element. A PET/CT was performed to see if there were any other lesions in the body. The lesion itself showed moderate uptake in the solid component.

Th biopsy dilemma was related to the approach. The initial idea was to try a lateral approach, but the oncosurgeon said it would be fine to use a posterior approach, so a simple biopsy using an 18G coaxial biopsy gun was performed.

The diagnosis was low grade spindle sarcoma, likely a myxofibrosarcoma. The patient was then operated by a general orthopedic surgeon and the fascial tail was not tackled. There was also a discrepancy with the final report, which was reported as a hemangioma. We followed up with the patient for a year but he had no clinical local recurrence and thereafter he told us he was fed up of our calls and asked us not to call him again.